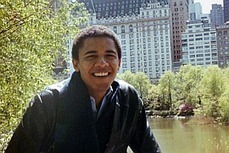 Wayne Allyn Root’s book The Ultimate Obama Survival Guide is out now. I just returned from New York, where I attended my 30th Columbia University reunion. I celebrated with my esteemed classmates. Everyone except Barack Obama.

A mystery that is compounded by the fact that Obama has spent several hundreds of thousands of dollars in legal fees to insure any and all records of classes, financial aid, passport, transcripts, social security record, selective service registration… be sealed and barred to any person, organization, or government entity.  Does the main street media lack curiosity, or do they fear being labeled "racist" for doing what they would surely do if the person lusting after the power of the Presidency were white and/or not a Democrat.  Or is it due to an even more sinister goal?

What we have is a complete merger of a leftist government with it’s media arm, the American "main stream"press… which has become nothing more than a copy of the propoganda system that Joseph Goebills put in place under Adolph Hitler.  There can be no other conclusion to the question. .why is their no interest in learning who Barack Hussein Obama really is?